Specialized Executive Vice President: It Will Take More Than a Year For Cycling Inventory to Recover 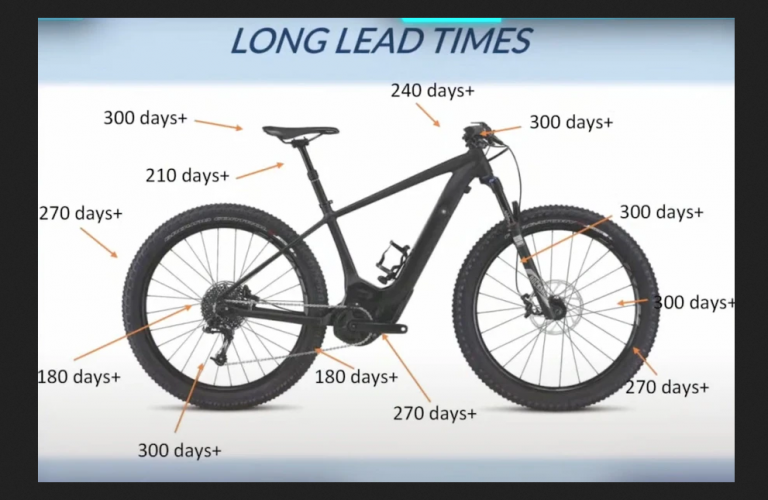 If you’ve been struggling to get hold of bike parts recently, don’t hold your breath that anything will change any time soon. In a talk given as part of the Tapei Cycle Online Show yesterday (May 10th 2021), Robert Margevicius, Specialized’s Executive Vice President, predicted it could take “a year or more for the industry to fully recover and build back up the inventory so we have the product available for the market”.

Margevicius noted that bike sales remained stable for the past 25 years but a surge of more than 38% this year has caused serious disruption. With demand now far outstripping supply, lead times have ballooned on components from 30-60 days up to more than 300-400 days for some parts such as suspension, contact points and wheels. He warned that inventory levels are currently dangerously low and with customers now unwilling to wait, any sale that isn’t made on the spot seems to lead to a lost sale for the industry rather than a delayed one.

One solution might be to increase the supply of components, however, it seems the manufacturers are unwilling. Margevicius is predicting that the industry will record a 43% growth by 2030 but his confidence doesn’t seem to be shared by the factories in Taiwan. In a separate talk at the Show, Bicycle Retailer and Industry News reports that both Margevicius and Ton Anbeek, CEO of Accell Group, urged Taiwan’s components manufacturers to upgrade their capacity with new factories but for now, they are choosing to be more conservative.

While the factories have apparently increased efficiency by around 10-15%, Margevicius believes this will not be enough to keep up with a growing market. He said, “That isn’t really helping us much, to be honest with ya. The future is now, and industry leaders… need a sense of urgency and a mandate to believe and invest… There are billions of dollars to be made and profits for those who believe and invest in a healthier and a stronger business.”

Anbeek echoed his thoughts, saying, “To meet the growing demand in the coming years we need component suppliers to invest in extra capacity to produce more critical components and products as soon as possible. And this needs, more than ever before, to be based on a long-term commitment and partnership between branded bike manufactures and component suppliers. Accell and its brands look forward to working with you to profit enormously from this very green and favorable market circumstance and trends.”

However, in the few years it takes to get a factory online, the boom period may have passed and this would leave manufacturers with more capacity than orders. Other industry trends, such as the growth in local manufacturing and factories opening in other Southeast Asian countries may also be playing into their lack of confidence.

‹‹ Back to Main Articles Page

Sign up to get the latest on sales, new releases and more...